150SG117Q, 150SG122Q, 200SGL119Q-2, 200SGL130Q, 200SGL153Q
Email: garrett@aeroval.com
OEM Phone >>> OEM Contacts
OEM Contacts >>> Service Centers
All Other Inquiries >>> Email Us
Parts Inflation Calculator
Note: All product details including supersedure and pricing information are provided for reference only and should be verified and confirmed with OEM.

Part Number 001705-211-56 is a MODULE - 10 CONTACTS manufactured or catalogued by Airbus Helicopters, Inc. (American Eurocopter). In some cases a proprietary airframe or engine manufacturer's part number may be assigned to identify the same part which was actually manufactured by a different component OEM. These airframe, engine and accessory parts are generally classified into three categories - rotable, expendable and consumable parts. To define and better understand FAA approved aircraft parts, refer to FAA Advisory Circular AC20-62E. Current catalogue availability is subject to change and may be affected by inactivity, supersedure and obsolescence.


Do you know the current price of this item? Use this inflation calculator to determine the estimated annual inflation of the price since our last referenced price.

* Results are approximate with accuracy and authenticity based on price/date information entered by user. Provided for reference only.


Please fill out the following form to suggest a FAA-PMA replacement part. 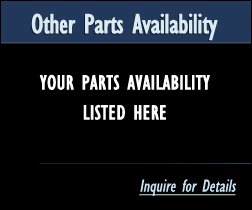